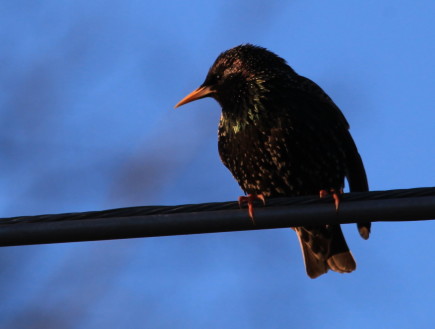 I recently unsubscribed from several birding lists after seeing a video posted by a well-known Kansas birder in which he snapped the neck of a starling on camera as he instructed viewers on how to rid nest boxes of starlings. He also likes killing house sparrows and posted links to these videos on his personal website to show other birders how to kill them. Despite all the information available on a variety of ways to prevent starlings from kicking other birds out of nest boxes that do not involve killing, he chose killing, and seemed to enjoy sharing just how effective a killer he is (he never actually had to touch the bird he killed).  Why did he choose this method and what made him think that it was not only okay, but so okay that he could film it and post it on YouTube as easily as he could post a toddler’s birthday party? He did it because his bloodlust is not only socially sanctioned it is encouraged.

Does the birder’s method help declining native bird populations? No. It does not. In fact, there is no scientific evidence that starlings have had much of an effect at all on native bird populations. That’s right. Birders will tell you otherwise, but let me say it again; there is no scientific evidence that starlings are responsible for declines in native bird populations. Some studies suggest starlings have effected sapsucker and bluebird populations. However, the research did not control for human effects such as sprawl, deforestation, pesticides, and just general killing, so there may or may not be any truth to that theory. The introduction of European starlings was a human act, and at least as far as bluebirds are concerned, nest boxes that starlings cannot enter have helped bluebirds very successfully rebound (humans rectifying habitat loss). Interestingly, after I posted a picture of bluebirds nesting in a tree cavity a few years ago, I had a birder write to me to argue that bluebirds never do this, that they only use boxes. He just could not let go of this idea that “we” saved bluebirds from starlings. Just like European Americans, starlings are here, and they have been here for a while. While the evidence does not show starlings have done the damage humans like to give them credit for, there is plenty of scientific evidence regarding human responsibility for the reduction in all bird populations globally, but more on that later.

Back to the birder and how he came to his socially sanctioned methods of killing, and pleasure in displaying those kills.  I mentioned above that his killing is socially sanctioned.  Many birders, like many other humans, are speciesists. In other words, some birds are special. Others are not. This isn’t any different from other kinds of bigotry. The birder who hates starlings and house sparrows probably hates immigrants too. And, they have thousands of people reinforcing this behavior.  They go out on birding trips then stop on the way home for fried chicken. They will drive for miles, even fly thousands of miles, just to add a bird to the life list, but they sadly miss the obvious connections.  I love birds and when I am out, I often run into other birders who are fun to talk with about who they have seen on their outings. However, I am hesitant to call myself a birder particularly since these meetings with other birders generally end with me kindly excusing myself when the conversation turns to something like, “Yeah, if we could just get rid of those Canada geese.” It is important to remember that birding was not necessarily started as a pastime devoted to celebrating and saving birds as much as collecting and cataloging, and competing. After all, Audubon was fond of killing birds so he could get a better look at them and modern Audubon magazines contain advertisements from Monsanto. We are talking about a history of self-interest, not a history that is particularly good for birds.

Attitudes and beliefs are cultural. They get handed down.  Whether we are talking about racism, homophobia, sexism, ableism, or speciesism, people learn these beliefs. The good thing is they can also unlearn them. It just takes time, a lot of self-reflection, and critical thinking, something we Americans are not known for being too keen on. However, we can change the narrative. We can celebrate the immense diversity of birds, all of them. And, we can work to protect all of them. First, we have to undo the idea that some birds are more worthy than others are–just as we have to undo this thinking when it comes to humans. And really, these assumptions of superiority are just bad science. We have to start with the assumption that species exist for their own reasons, not ours. We have to teach the importance of place within the ecosystem, even when that system has been changed, whether that be the introduction of European starlings and English sparrows or European humans. After all, most of the folks doing the yelling about invasive species are an invasive species themselves. We can’t have it both ways. How long do starlings have to live in America before they are no longer invasive? Does that logic also apply to European American humans?

When Kansas delisted the bald eagle from the endangered list a few years ago, I went on a rant. I said, “Mark my words. As soon as bald eagles are back from the brink and getting into people’s garbage cans, there will be calls for mass killing of bald eagles. Everyone will have forgotten about DDT and how we almost lost this beautiful bird.” In other words, once more abundant, bald eagles will no longer be special.  While there is a great deal of scientific evidence that supports the theory that humans have more to do with the decline of bird populations across the board (bald eagles, for instance) than any other factor, the true impact is difficult to gage when so many of the long-term studies are funded by corporations with a vested interest in downplaying these roles and carried out by biologists with no self-awareness regarding non-human animals. It is much easier to blame starlings and house sparrows (and often cowbirds) than it is to acknowledge that we are now looking at the strong possibility of an absence of birds altogether because of human misuse and abuse of resources and space.

Birders can get on board with scapegoating as it provides a justification for shifting blame and continuing to waste resources in pursuit of the exotic. They do not have to change their behavior. They can continue to view one bird in awe while at the same time eating another bird who had a very short life suffering on a factory farm. They can travel extreme distances to view one bird without acknowledging the harm the airplane fuel is doing to the very bird they are going to see.  They can call it “eco-tourism” and pretend that by traveling this distance they are actually doing good in the world. They may tell themselves that their tourist dollars are helpful rather than exploitative. They are able to compartmentalize in ways that allow them to keep doing what they are doing, and even feel righteous about it.

Observing this righteousness makes it easy to see the connections between behavior toward a species of birds and humans deemed different. The parallels regarding attitudes toward house sparrows and starlings and immigrants in this country is incredibly obvious, yet rarely mentioned because of the difficulty many humans have with seeing any connections between their lives and the lives of the nonhuman animals they share the planet with. This willful ignorance is harmful to all of us. In her book Sparrow, Kim Todd noted the language used to describe house sparrows and its connections to attitudes toward immigrants in America. House sparrows were described as trashy, lower-class, and even equated with communism as a way to motivate people into participating in their demise.  While Todd’s book was referring to an Atlantic Monthly article of 1885, the language is not much different than what I have seen applied to starlings and house sparrows on birding lists. Dirty, bully, ugly, greasy, and other charming words are often followed with, “How can I kill them?”

Since posting this article, I learned the birder referred to in the first paragraph actually has a table on his website where he keeps track of how many starlings he kills. Interestingly, he never uses the word “kill” on his website, but calls it “trapping.” This giddiness he has regarding the killing of these birds is quite chilling, yet sadly, not unusual to see on birding lists. I saw a post on one the other day in which a man signed his post, “Sandhill crane killer.”