I think the folks at Operation Wildlife are saintly. The work they do is incredible. I want to pass on an update from Director,  Diane Johnson, and encourage everyone to donate.
June 10, 2010
Hey everyone,

Well it’s been one of those days ~ we’ve been hit hard again.  After literally the 45th phone call today I find myself getting cranky.

I’m frustrated with people especially the callers I’ve had today. This one lady in particular chapped my backside pretty well but I tried to “play nice”.  She called saying that she had a baby white tailed deer fawn.  After going thru the usual questions of where did you find it & what the circumstances were she announced that she had already had it for a week & her pre-teen kids were playing with it & feeding it.  The only reason she was calling was because it was sick & had diarrhea.  I told her if it had diarrhea that she needed to bring it in immediately ~ well her kids had activities & she had to work & then had to go to the store after work & there wasn’t any way that she could bring it in until maybe the weekend.  I reminded her that it was sick & that since it was a baby that diarrhea was considered a critical situation & we should get it today.  I finally suggested that one of our volunteers go to her home & pick it up since the kids were home with it.  She conceded & I sent a volunteer.  Two & half hours later the fawn arrived dehydrated & with a scalded butt from the diarrhea (the volunteer made a round trip drive of over 100 miles to pick it up).  This kind of thing is really discouraging because she kidnapped this baby.  Had she called a week earlier it could have been returned to its mother.  Instead she decided to keep it & let her kids experience nature.  She’s also one of those folks that can’t seem to find us when they have something healthy but miraculously figure out who we are after they’ve messed it up. 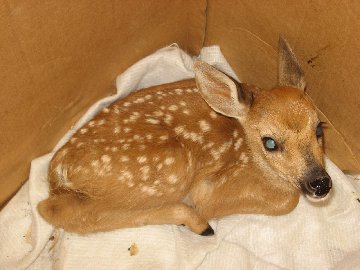 Or here is another one ~ this lady left an exotic Russian tortoise on the doorstep of a vets office with a two page note. Excerpts follow ~  “I’ve been schlepped around by young children who dropped me & I have a crack in my shell.”  Please find me a home along with detailed instructions on how to care for the tortoise.  However, she neglected to add that I have a severe vitamin A deficiency & can’t open my eyes because of it or that my shell is soft & bends because the calcium wasn’t sufficient in my diet & I’ve leached it out of my shell just in order to continue living.  At the end of the note she tells us that this tortoise can live 50 years & that we should just pass it on to others to enjoy when we’re tired of it.  This isn’t a great picture but you can see how swollen the eyes are. 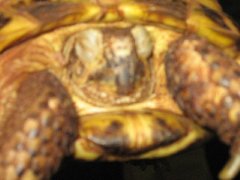 And last but not least ~ the stubborn farmer.  His hired hands found this coyote pup on land that he farms.  He told them to leave it alone ~ they didn’t & ignored him &  brought it to us.  There wasn’t anything wrong with her & she did need to be left alone ~ he was right about that.   I called & asked for a location to return her too.  He won’t give it to me because his hired hands should have listened to him in the first place & so it’s just too damn bad but she’s ours now.  Of course, if I want to deliver it to him he’ll call in the pack & put it back by himself.  Call me suspicious or crazy but I’m afraid he’s gonna shoot it to prove a point to his help so I’m off to find another pack for this little girl. 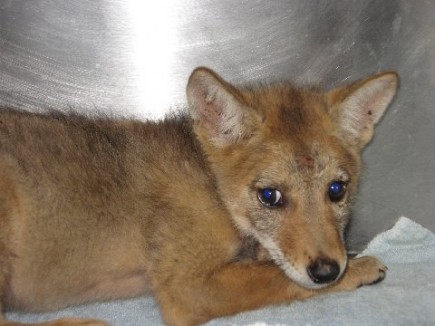 So as you can see we’re not batting a thousand today but then there is this light at the end of the tunnel.   Meet the woman that has driven three times this week from Paola ~ an hour from our facility ~ with baby skunks.  She’s made a total of 6 hours travel time.  Their dog killed the mother & these little guys just keep coming out of the den as they get weak & hungry.  We’re up to 6 now ~ all doing well.  It’s people like her that keep me going ~ giving me hope that there are people out there that care for other creatures other than just themselves.  And yes just in case your wondering ~ these guys are “locked & loaded”  having the ability to spray from birth. 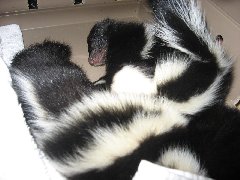 Our facility is home to approximately 400 wild babies.  We’re running out of food.  Our “produce” bill is over
$ 100 a week because as you know growing kids eat, eat, eat.  If you’d like to help you can do so in the following ways ~
1) Donate gift cards from Walmart so we can shop for fresh produce (we’ve found they are the least expensive & we get more bang for our buck so to speak than Price Chopper or Target)
2) Going shopping yourself & want to get something for us that isn’t perishable?  We need
Dark green & dark yellow gerber baby food
Applesauce
Paper Towels ~ for baby bird nests
3) Money is always welcome to buy those things that we can’t find in a regular grocery store like rats, mice, quail, minnows, crawdads, earthworms, red wrigglers or mealworms.
And last but not least thank you for being in that 25% that cares about the animals ~ your support is what keeps us here for the animals.  We wouldn’t be here without you.   It takes a huge team to keep this going.  Sure do appreciate you guys being on my team.  You’re great!
Diane
Diane Johnson, RVT
Executive Director
Operation WildLife, Inc
23375 Guthrie Rd
Linwood, KS 66052
V: 785-542-3625
Fax: 785-542-5114
Email: opwildlife@aol.com
Web: www.owl-online.org to GIVE NOW