Every morning before dawn, I go out to the yard, rinse out bird baths, refill feeders with seed, jelly or oranges for orioles, nectar for hummers, put out a dried corn cob on the “squirrel tree,” and scatter around the yard a few nuts, raisins, and sometimes apple cores for all the yard critters. We see a diversity of bird species and mammals in our yard. We have quite a few resident rabbits and regular visitors like an opossum who loves raisins, birdseed, melon rind, and potato peels. We occasionally see foxes, raccoons, and sometimes a skunk or coyote. I know a couple of the resident rabbits well. They generally come up to me for raisins. I know the yard well. I know when something has changed or something is wrong. Over the summer, the dynamics of our yard have completely changed because of one well-fed neighborhood cat.

I saw my first chickadee the other day after not seeing one for weeks. The orioles who would be coming to the feeders in abundance are just gone. I see few cardinals, goldfinches, titmice, or woodpeckers. I have not seen a blackbird in weeks. The rabbits who greeted me every morning are a rarity now waiting until dusk most days to show up because that is when the cat is not around.  Visiting Cooper’s hawks have some role in the disappearance of birds, but not all. All of this is due to one cat who spends most of his time in our yard because his humans rarely take him inside.

This morning, as I made my way around the yard, I saw the cat come running from the back. I assumed he saw me and was running home, but he was only going somewhere to wait for me to go inside so he could resume his stalking. I am not blaming the cat. This is what cats do. He seems leery of me, so I have not tried to make friends. I do not want to encourage him to hang out here. I am always relieved when he sees me and leaves. As I made my way around to the back of the house this morning, I heard a scream. If you have ever heard a rabbit scream, you know there is nothing quite like that sound. The cat came charging out of a bush with a small rabbit in his mouth. The rabbit was not a baby, but not quite juvenile-size either. I yelled something like, “Fucker!” at the cat as if he was going to drop the rabbit and apologize for terrorizing him.

I figured the cat was not going far with his prize, so I got a flashlight from the garage and started down the street in the direction I usually see the cat coming from, or running to when he sees me outside. I saw him sitting in a yard a few houses down. I thought the rabbit must be near, so I moved toward the cat and he ran away. I shined the flashlight in the grass and sure enough, there was the rabbit, eyes wide open, blood coming from his leg. I picked him up and talked to him on the way back to house. I wrapped some paper towels around him to soak up the blood, and then put him on a towel in a crate to stay warm until I could take him to Operation Wildlife when they opened. I did not want to handle him too much for fear of causing more trauma, so I was not sure the extent of his injuries, just that there was a lot of blood.

This isn’t anything out of the ordinary. These life and death struggles go on in yards all over the country (few notice). On my way back to the house, I saw one of the adult rabbits in our yard watching me carry the injured rabbit up the driveway. I could imagine her saying, “This is how it is. We will lose most of our babies every season.” I would imagine the humans responsible for the cat terrorizing the neighborhood have no idea, and if they did, might make some excuse of how bored he is when kept inside. The thing is, that does not have to be. He is not hungry; he is just killing because that is what he does. And sadly, being outside all night, he probably will not live much longer, so no one is doing him any favors by letting him roam.

Is it better for the cat to have a brief time free roaming outside than a longer life indoors? One could make that argument, but much of the time, I do not believe the cat’s well-being is the reason, just the excuse. If well-being was the reason, he would not be out all night and most of the day. My concern is the damage he is doing to so many beings just trying to live. He may be happy terrorizing the neighborhood, randomly stalking and killing a variety of other animals, but those animals want to live, too. He is his humans’ responsibility. And, I should note, these humans are also responsible for the work time I lost this morning.

I want to make it clear I do not blame the cat. I love cats. We have a cat. She stays inside. I have no opposition to cats outside supervised closely or enclosed in outdoor areas. If I see a cat who looks hungry, who might be a stray or feral, that is a different thing entirely. They are doing what they need to do to survive. But I am over people who say they love cats, and then leave them outside unsupervised to terrorize everyone else, and often to be terrorized themselves.

I just heard from the wonderful folks at OWL; they patched up the rabbit and he is doing fine. I am so glad! Sadly, I will not be able to pick him up and release him back here. OWL would rather not release him where he was attacked by a cat and I certainly understand that. Now, this rabbit will have to adjust to a new, unfamiliar space, far away from any kin he knew, and for no reason. I keep wondering, how does he process what happened to him this morning?

I know with so much going on right now that has our attention, organizations like OWL are probably getting fewer donations. If you can, please give what you can: http://www.owl-online.org/ And on Facebook: https://www.facebook.com/OperationWildlife 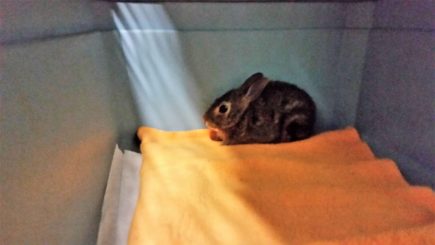