Robins are kind of mystery. Sometimes they migrate and sometimes they do not. In my winter observations here in Lawrence, I will sometimes not see any in town, but see large groups out at the lake. They are kind of nomadic in the winter. They do not eat birdseed, but go where the winter berries are, and according to my bird books, stay until the berries are gone. My lone robin friend was outside for raisins about every day last week. I worried about him when the temperature dropped and took raisins out to him every time he appeared at the window. Yes! He knows to hang out on the feeder pole on the patio to get my attention. He even comes up by the car when I pull in the driveway or open the garage. I totally believe we communicate on some level. I should say, I know we communicate. The first day of the extreme cold, he was still coming, but did not seem to be doing too well. He seemed lethargic and I saw him kind of stagger under the brush pile we have in the backyard (for the purpose of cover and warmth for neighborhood wildlife). The next morning, when it was three below, he was nowhere around and I was sure he did not make it. This morning, there he was, on the patio waiting for raisins. I saw him one more time a little later on a tree in the front of the house, with a lady robin. When it started snowing, they were gone and I have not seen them since. I am fascinated by where he goes that he is gone a day or two, then back again looking great. My theory is he goes with the group when getting unfrozen water is difficult. Otherwise, he is here ready for raisins and ready to take up his territory for spring.

I did not have my camera with me the last time I saw him, but this one is from one early morning a couple of weeks ago. 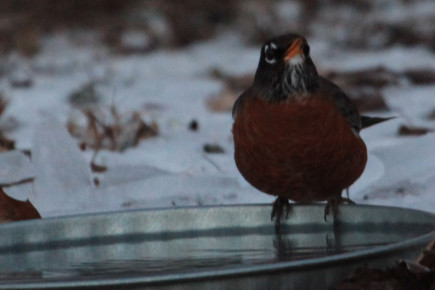