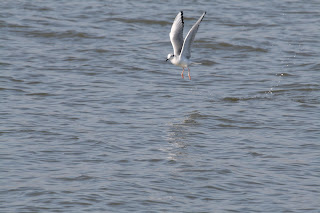 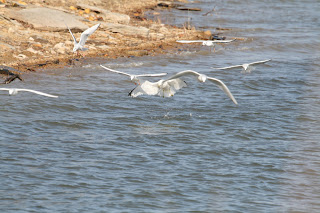 With the temp. at 17, I thought it might be fun to return to the slightly warmer weather of a month ago. Click on pictures to enlarge. 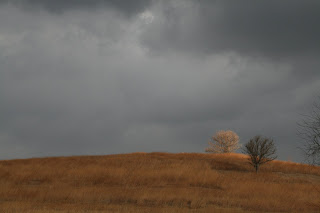 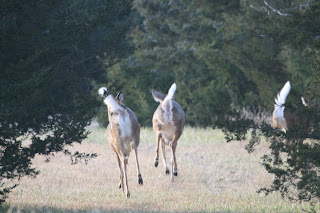 The wind and the cold move in; the deer run away. When we started down the path, the temperature was around 55. By the time we got back to the car it had dropped by 20-30 degrees. The amazing Kansas cliche in action. Click on pictures to enlarge.

I don’t have any more details than what is in the brief story below.

Bald Eagle Found Dead in Western KS, Talons Gone Date: December 16, 2008
Federal investigators are looking into the death of a bald eagle that was found December 7 in a Lane County ditch with its talons missing. A natural resource officer in Kansas isn’t providing many details because the U-S Fish and Wildlife Service is still investigating the case. Wildlife officer Terry Gropp says possession of any part of a migratory bird is illegal, and noted that bald and golden eagles are protected by the federal Bald Eagle Protection Act. He says anyone who possesses any part of such a bird can be fined $5,000. 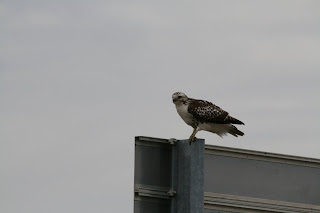 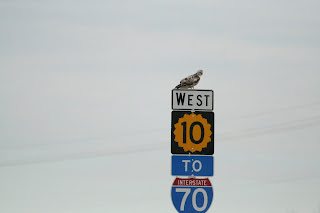 We really enjoyed watching this young hawk the other day. She seemed to have no problem sitting on her sign directly next to the highway traffic. Click on pictures to enlarge. 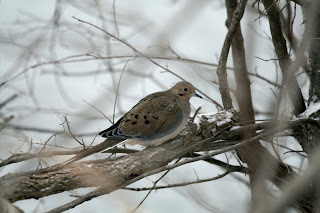 I stopped by one of our favorite eagle’s nest today to see what the parents were up to and discovered several doves avoiding the cold and blowing snow by hiding under some brush near the water. I wanted to bring them all blankets. 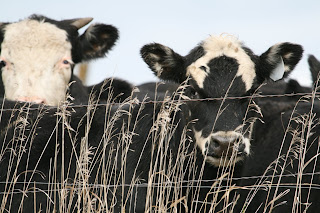 These are not happy cows.

Over the years, I have experienced much frustration and sadness over the growth in popularity of nonprofit organizations that send live animals to impoverished countries all around the world. This growing phenomenon is headed by the high-profile Heifer Project International, which – I believe – is doing a great disservice to the people it wishes to help, to the environment, to the public who is persuaded and mislead by celebrity sponsors, to the children who are desensitized to animal suffering, and to the animals themselves. Heifer Project is so successful at making people think they’re actually helping animals that I know of several animal activists whose family members donated to Heifer on their behalf, thinking they were doing something for animals. They thought, because these activists “loved animals” they would appreciate having a goat bought in their name and sent to a needy family somewhere around the world. Luckily, that hasn’t happened to me, but for awhile I was receiving their “catalog” – this is actually a full-color, very well-produced “catalog” of animals and children. You choose an animal – a goat, a llama, a cow, a chicken – or what they call an entire “ark” of animals and your donation is translated into live animals being transported to a family to be used. This, in my opinion, essentially amounts to nothing more than a slave trade – an animal slave trade.

Now, let me just say that I’m often perplexed by the claim that animal advocates are anti-human. You’ve probably heard that before or maybe you’ve made that claim yourself. What perplexes me about that accusation is that it implies that compassion for one species means lack of compassion for another; as if our capacity for mercy and kindness is limited. When we deem certain human groups unequal, we call it racism, sexism, or anti-Semitism. When we make this claim about non-human animals, we justify it – their inequality, that is – on the grounds of tradition, science, or religion. But there is a name for this – it’s called speciesism. The claim – that animal advocates are anti-human – seems really odd to me because though we are reminded every day that humans steal, lie, cheat, kill, rape, and hurt each other, I’ve never heard any of these people called “anti-human.” It seems to me that the accusation would better suit someone who actually acts against humans, which is something we see and hear about every day in the news, on the street, and in our own homes. Ironically, those who commit the worst crimes against humans are derisively called “animals.”

This societal premise leaves animal advocates reluctant to publicly object to such groups as Heifer Project International, lest they be accused of caring more about animals than humans. Heifer’s mission is “to end hunger and poverty and to care for the earth.” Their mission statement does not say that they give animals to people around the globe to use, breed, sell, and consume their milk, eggs, flesh, hair, fur, feathers, and skin. Instead, Heifer, whose $75 million revenue increases every holiday season, dupes individuals and seemingly progressive celebrities, such as Susan Sarandon, Frances Moore Lappe, and Jimmy Carter, into supporting what is essentially an animal slave trade.

Aside from the obvious problems this model creates: such as environmental problems economic problems, (raising animals for human consumption is expensive and inefficient) health problems (globalizing our preventable diseases such as heart disease, cancer, and diabetes hardly seems charitable; and despite the fact that two-thirds of non-Caucasians on the planet are lactose intolerant and cannot digest dairy, Heifer is spending millions on dairy programs in countries like Zimbabwe. The last thing a hungry child in Africa needs is the milk of a cow.) Aside from these problems, and I’m skimming over only a few, Heifer perpetuates a speciesist paradigm, viewing animals as mere commodities with no regard for their own inherent value.

Heifer says “sharing the offspring of gift animals with others in need” is “fundamental” to its approach; however, a mother’s relationship with her offspring is sacred and not unique to humans—we even call ourselves “mother hens” when we fuss over our own children. We admire the fierceness with which a mother bear protects her cubs. Manipulating a female’s reproductive cycle is offensive enough (as with egg-laying hens and lactating cows), but to take away her offspring is – to my mind – the ultimate blow.

If you’ve never seen their catalog, it’s absolutely amazing. It reminds me of those depictions of happy slaves smiling and laughing while working in the fields, depictions designed to shape public opinion and squelch any potential uprising among the slaves themselves. The Heifer Project’s glossy “catalog,” sent to millions of homes every year for “holiday shopping,” egregiously exploits children’s affection for animals and manipulates our own sensibilities, as they depict beautiful gorgeous children hugging these animals. And if you look at this catalog, you’ll notice that they’re all babies. These are gorgeous photos – with smiling celebrities proudly hugging beautiful animals – these animals are all babies, an egregious manipulation of our own appreciation for life, our appreciation of youth, our enthusiasm for babies – all babies. Everyone goes crazy when they see a baby chick or a baby goat – for god’s sake, they’re perfect.

But this carefully crafted public relations campaign succeeds in helping us forget that these catalog “products” are living, feeling beings who will be used up and killed. Sure, they say that this animal or that animal is valuable for “meat.,” so it’s not like people aren’t aware of that, but as with any effective marketing campaign, the real truth is concealed. There are no pictures of slaughter, or of females yearning for their young, or of the animals’ living conditions. It’s not just Heifer; they lead the pack, but there are other nonprofit organizations that also solicit donations to send animals to people all around the world, including Oxfam, Send a Cow, and Christian Aid. Now, this isn’t an all or nothing situation. I’m not suggesting we don’t help the hungry; what I’m suggesting is to do it in such a way that benefits EVERYONE and that doesn’t exploit ANYONE.

There are many other programs dedicated to providing solutions to hunger without exploiting animals. Trees for Life (treesforlife.org) and the Fruit Tree Planting Foundation (http://www.ftpf.org/) enable you to buy a fruit tree in someone’s name, providing a food source to communities in developing countries. Every time you buy a gift from the Women’s Bean Project (womensbeanproject.org), you help a woman break the cycle of poverty and unemployment by supporting their programs that provide skills and training to women. One of Plenty International’s (plenty.org) programs includes training villages in soy bean agriculture and production as a way to improve nutrition, soil quality, and food security. Through Sustainable Harvest International, whose website is http://www.sustainableharvest.org/, you can contribute to planting trees in Central America, which has lost more than half of its rainforests in the last 50 years, and of course we know that much of this occurs to provide grazing land for cattle, who will be slaughtered and exported, so that Americans can have cheap meat. Finally, Animal Aid, a UK charity, http://www.animalaid.org.uk/, is supporting a tree-planting initiative in Kenya, which will provide fruit-bearing trees for local families. The aim is to help 100 families to plant 20 trees each, which will bear oranges, avocados, mangoes, and macadamia nuts, with a few additional trees for timber and firewood.

If we claim to be a compassionate society—a compassionate species—don’t we have a duty to foster solutions that do not harm others? The great humanitarian Albert Schweitzer certainly thought so when he wrote, “The thinking [person] must oppose all cruel customs no matter how deeply rooted in tradition and surrounded by a halo. When we have a choice, we must avoid bringing torment and injury into the life of another.” 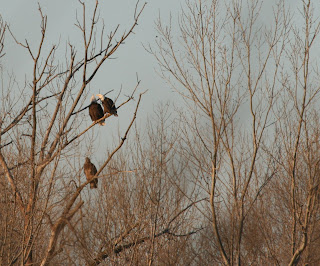 Yesterday, I went to check on the nestorations going on at the nest we watched so much during the spring. To my surprise, a juvenile was sitting in a tree near the nest. I think this juvenile may have been the one we watched take her first flight in June. The parents arrived, first one, then the other, and sat above her. A great deal of talking went on before one of the parents escorted the young one away from the territory. While it was wonderful to know that she is still with us (juveniles have about a 50% chance of making it through their first year), it was sad to see the parents run her off. I know it has to be that way, but it sure seems like a hard life for a young eagle.
Click on picture to enlarge. 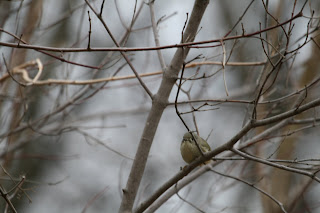 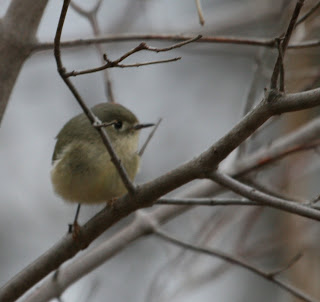 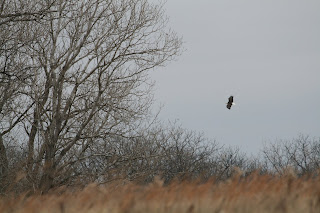 I witnessed all kinds of eagle courtship behavior today–couples spiraling through the air together. It was lovely to watch, but hard to get pictures of; they get really high. I was lucky to see this one flying over a field near the path I was on. Click on picture to enlarge. 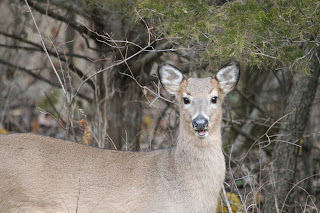